One of the most rewarding things you can do is start a fruit tree orchard of your own. Not only will it save you money, but it will also give you the satisfaction of knowing your fruit came from your own land!

But there are so many fruit trees from which to choose, so what should you plant? This article will give you a brief overview of some of the most popular fruit trees and will include varieties that perform well in our area and that are regularly in stock at a Marcum’s Nursery near you. Apple trees are very popular fruit trees among home fruit gardeners.  They can produce a lot of fruit, they’re incredibly versatile, highly adaptable to different soils and climates, and they’re among the hardiest of fruit trees. In fact, one cultivar or another will grow in all 50 states.

Apple varieties recommended by the Oklahoma State University Extension (and available to purchase at Marcum’s) are ‘Gala,’ ‘Jonathan,’ ‘Red Delicious,’ ‘Golden Delicious,’ and ‘Fuji.’   When choosing apples to plant in your home orchard consider the following:

A BIT ON BLACKBERRIES

Blackberries are great for beginning gardeners as they’re relatively easy to grow, they require little care in terms of maintenance and pest control when well-sited, and they produce fruit reliably. They come in two types, upright and trailing, and both types have cultivars with and without thorns. They produce fruit in late summer and early fall, which can be enjoyed fresh, frozen, or used for preserves.

When planting blackberries, prepare your ground by incorporating organic matter and a balanced fertilizer.  Brambles prefer slightly acidic soil (pH 5.5 to 6.5), so get your soil tested before planting and adjust pH level, if necessary.  Space your plants appropriately (2 feet apart within rows for upright cultivars and 4-6 feet apart within rows for trailing cultivars), provide support for better yields and easier picking, and water plants consistently (soaker hoses water blackberries efficiently by delivering water directly to the roots while eliminating water on leaves, stems, and berries which can cause disease).  All that’s left to do is enjoy fresh, tasty berries. THE BASICS ON BLUEBERRIES

Blueberry bushes are hardy plants that require little maintenance and produce delicious, antioxidant-rich fruit.  They are also remarkably ornamental adding interest to the landscape, and their bell-shaped flowers are sure to be some of the cutest blooms in the garden.

Blueberries are native to North America, but they prefer soils that are much lower in pH than typically found in Oklahoma.  But don’t let low pH requirements stop you from adding blueberries to your garden; they are perfect for containers where soil conditions can be easily controlled.  Remember, however, that plants in containers are less cold-hardy, so be prepared to move your blueberries to an unheated garage or shed during the winter months.

You might have to fight birds to get a harvest (a little bird netting will do the trick), but you will never run out of ways to use fresh blueberries, and you will be absolutely shocked how much better tasting they are than those you buy in the grocery store.

Sweet cherries include more cultivars than the sour types, and they are generally more desired because of their sweetness.  However, sweet cherries don’t do well in the summer heat, and they typically grow better in cooler, western climates.  We do stock several cultivars of sweet cherries at Marcum’s Nursery, however, and we try to only grow and bring varieties into our stock that exhibit better heat tolerance.  Sweet cherries often need another cherry tree for pollination, so make sure you choose varieties that are compatible pollinators.

Sour or tart cherries, often referred to as pie cherries since that’s how they’re most generally used, perform much better in our warm summer temperatures.  ‘Montmorency’ is the most popular pie cherry, and it is one we grow annually at Marcum’s Nursery.  Another benefit of sour cherry trees is that they’re one of the few fruits that almost always self-pollinate well. 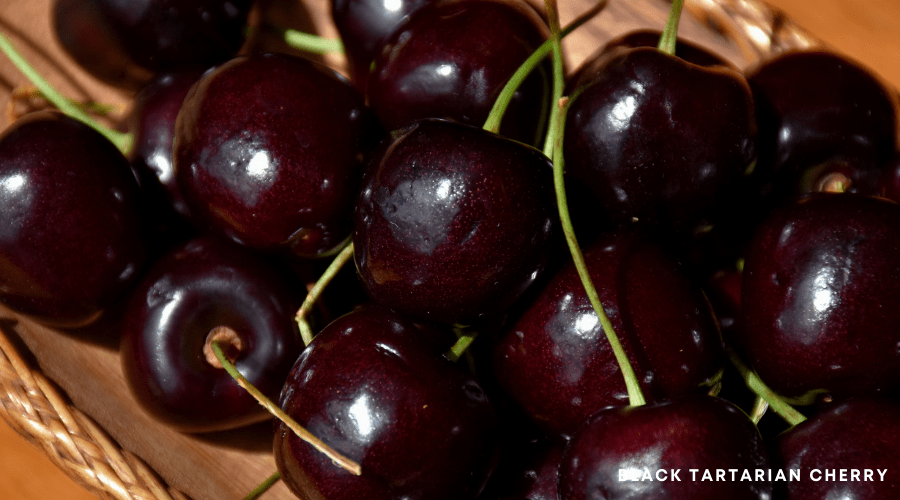 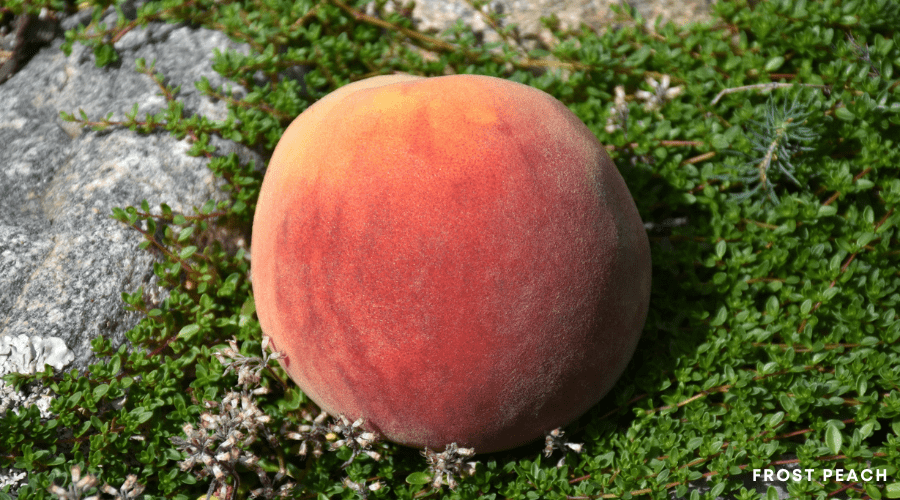 Peach trees prefer warmer climates, but they still need a chilling period to survive and produce fruit.  The USDA zones where Marcum’s Nursery operates range from 7a in Oklahoma City, Norman, and Goldsby to 7b in Ardmore.  Gardeners in our areas of operations will have better success with peach cultivars requiring fewer chill hours.  For example, most peaches require between 500 and 900 hours below 45°F, so select peaches on the lower end of the chill requirement range for best success.  ‘Redhaven’ is a peach cultivar recommended by the Oklahoma State University Extension, and it is one we supply at Marcum’s Nursery.  We have also had customers report great success with ‘Halehaven,’ and ‘O’Henry,’ among others, as well as ‘Bonfire’ and ‘Bonanza’ which are both patio peach varieties.  Next season we are adding some new-to-Marcum’s white-fleshed peach varieties to better balance out our yellow- to white-fleshed peach ratio.

Many peach trees are considered self-fertile, but to ensure a heavier fruit set it’s always best to plant two cultivars (this is true of any fruit or berry).  Peach trees need well-drained soil, so make sure to amend the planting site especially when the area is comprised of the tight, clay-heavy soil that is common in Oklahoma.  Adding organic matter, such as compost, before planting can be beneficial as can adding gravel or sand.  The key point here is peaches like light, well-draining soil, so amend accordingly.

Like their peach cousins, plum cultivars can be either freestone or clingstone.  Perhaps since they originated in so many places, they vary widely in size, shape, color, and flavor.  They are broken into three main categories: Japanese, European, and American.

Japanese plums (Prunus salicina) produce the fruit that is most often sold in grocery stores.  Their fruit is often round and juicy, and they come in a variety of flesh and skin colors.  Japanese plums grown at Marcum’s Nursery include ‘Burgundy,’ ‘Santa Rosa’ and ‘Late Santa Rosa,’ ‘Burbank,’ and ‘Methley’ to name a few.

European plums (Prunus domestica) are the most widely planted since much of the commercial European plum production is used to make dried plums (or prunes).  ‘Stanley’ is a European plum grown at Marcum’s Nursery, and we have plans to add another European cultivar, ‘Blue Damson’ next season. American plums (Prunus americana) are, unsurprisingly, native to the Americas.  Most are crosses of native wild plums and another plum species (most often the hardiest Japanese varieties). Though American plums are native to our continent, Japanese and European varieties are more commonly found in garden centers and in home orchards.

Plum trees bloom early meaning their blossoms are susceptible to freezing resulting in no fruit.  If you are fortunate enough to have options for a planting site, choose a higher spot (cold air sinks, so plums planted in low-lying areas are most at risk of getting frozen blooms).  Some plum trees produce bumper crops year-in and year-out with no purposeful planting of another cross-pollinating plum.  However, lack of pollination is the most typical cause of crop failure.  To give your orchard the best chance of reliably producing plums, be sure to plant two different cultivars of the same plum type (i.e. two Japanese plums).

If you need just one good reason to plant a pear tree, here are two:

European pears (Pyrus communis) are the type that comes to mind when most people think of pears because they have the typical “pear shape.”  Most pears grown in North America fall into this category.  European pears are picked while they’re still green, and they can be stored and ripened as needed.  ‘Bartlett,’ ‘D’Anjou,’ ‘Kieffer,’ ‘Moonglow,’ and ‘Seckel’ are a few European varieties often grown at Marcum’s.

Asian pears (Pyrus pyrifolia) usually start bearing fruit as younger trees and have a higher yield than European pear trees.  While all pears need a period of lower temperature during the winter, Asian pears are better suited for milder or nearly frost-free climates.  Their fruit is generally larger with crisper flesh than a European pear, and their fruit is rounded rather than “pear-shaped.”  Additionally, Asian pears are picked when they are fully ripened, but they too store quite well.  ‘20th Century,’ ‘Hosui,’ ‘Shinko,’ and ‘Shinseiki’ are varieties commonly found at Marcum’s Nursery.

If you need another reason to plant a pear tree, consider this: pears are an excellent source of vitamin C.  So, you can grab a homegrown pear the next time you feel a cold coming on!  After all, nature is the best medicine.

Nectarines are basically a non-fuzzy peach. As such, they require the same type of soil conditions as peaches, so be sure to amend to ensure light, well-draining soil.  Like peaches, nectarines are juicy and sweet, however, they are tarter than their sweeter cousins.  ‘Harko,’ ‘Flavortop,’ and ‘Sunglo’ are a few of the varieties that perform well in Oklahoma and that you can pick up at Marcum’s. FRUIT TREES ARE A GREAT ADDITION TO ANY GARDEN

We discussed several of the more common fruit types in this article, but there are many other common options (as well as some more obscure fruits) available as well – figs, raspberries, strawberries, goji berries, grapes, gooseberries, elderberries, pluots, plumcots, apricots, and NectaPlums™ to name a few.  Really, fruit is a great addition to any garden.  Those short on space can choose fruit varieties suited for container gardening and dwarf varieties that don’t require as much space; those with plenty of room (or acreage) to spare have nearly endless options to plant.  Fruit can add a beautiful visual element to the landscape while also providing a source of food for you and your family!

With some consideration about which fruits you most enjoy and a little research and planning, fruit crops can be easy to grow, even for the beginner gardener.  Don’t be afraid to experiment with different and unique fruit varieties, enjoy your bounty, and Just Add the Sun!